When Angelo had his birthday celebration in his school, I knew that superhero theme will excite him. Then his cousin, Johann also celebrated his 3rd birthday with Avengers theme.

So I opted to have an intimate and very simple affair  with people who love him dearly..my family! It was an event where the only agenda was to catched up on our daily life..

Well, we did more than talk. We also ate all throughout!

The party will be at my sister’s house so I thought about just throwing my hands up and going with no theme at all.

Until, I went to 168 mall and decided a color theme is better than no theme.

For his 7th birthday, it’s a Blue Theme Party. 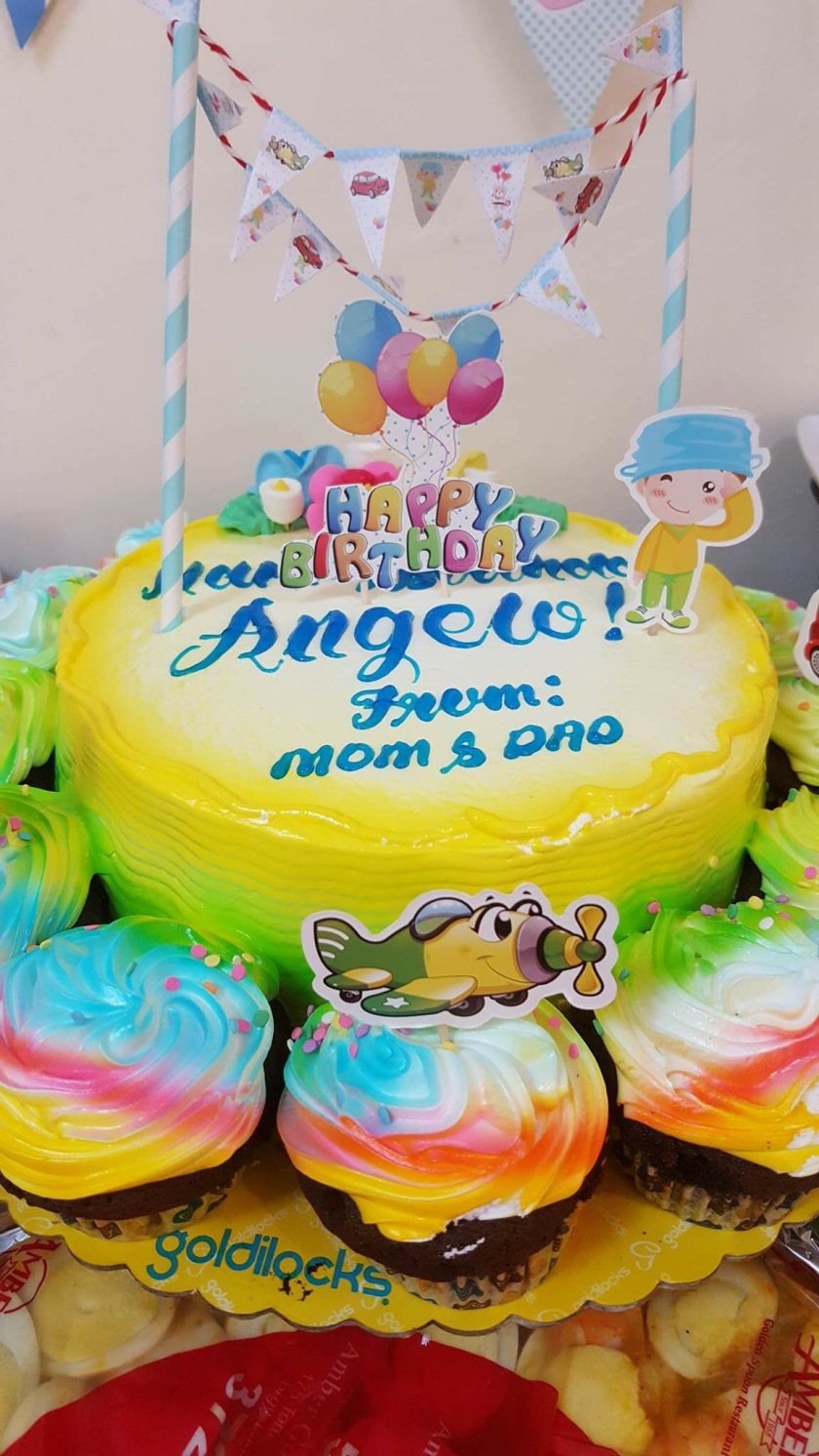 For the party food, we had a delicious spread of  my mom’s famous Spare Ribs Caldereta, then we ordered Pancit Malabon and Pork Bbq from Ambers. It’s a typical pinoy favorites, of course, our desserts were aplenty too! We feasted on  Buttered Puto, chocolate cupcakes from Goldilocks and Kakanin from our suki. 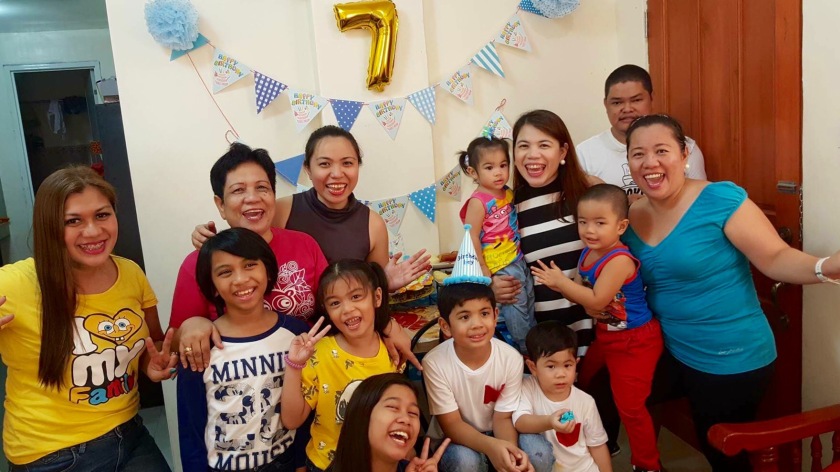 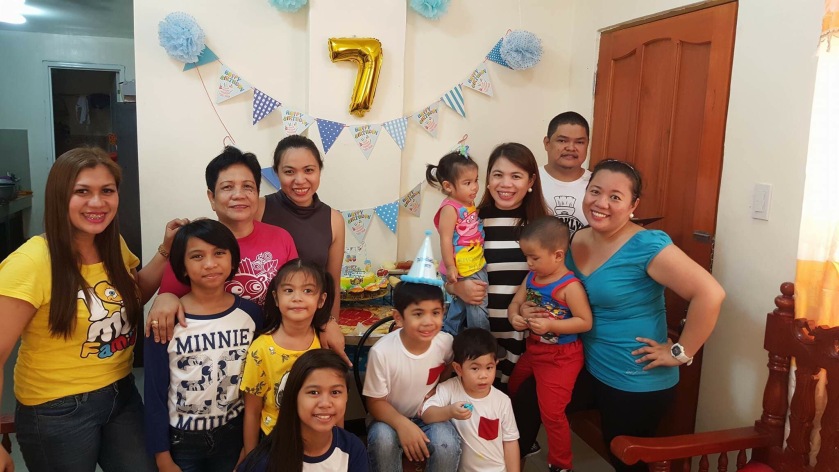 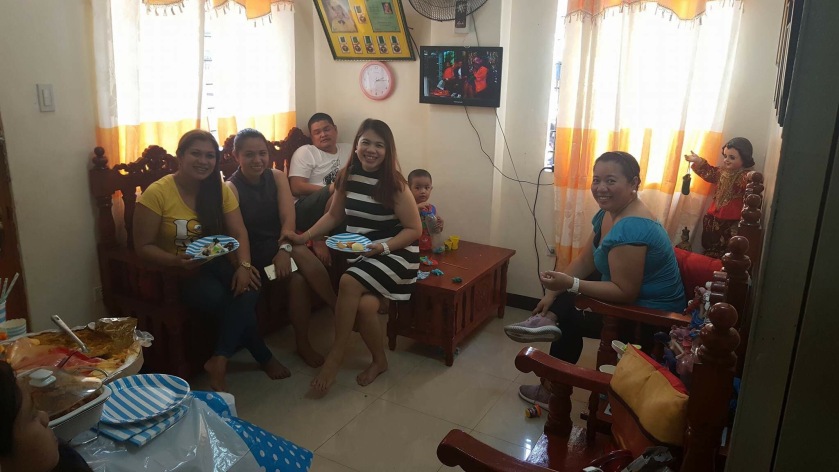 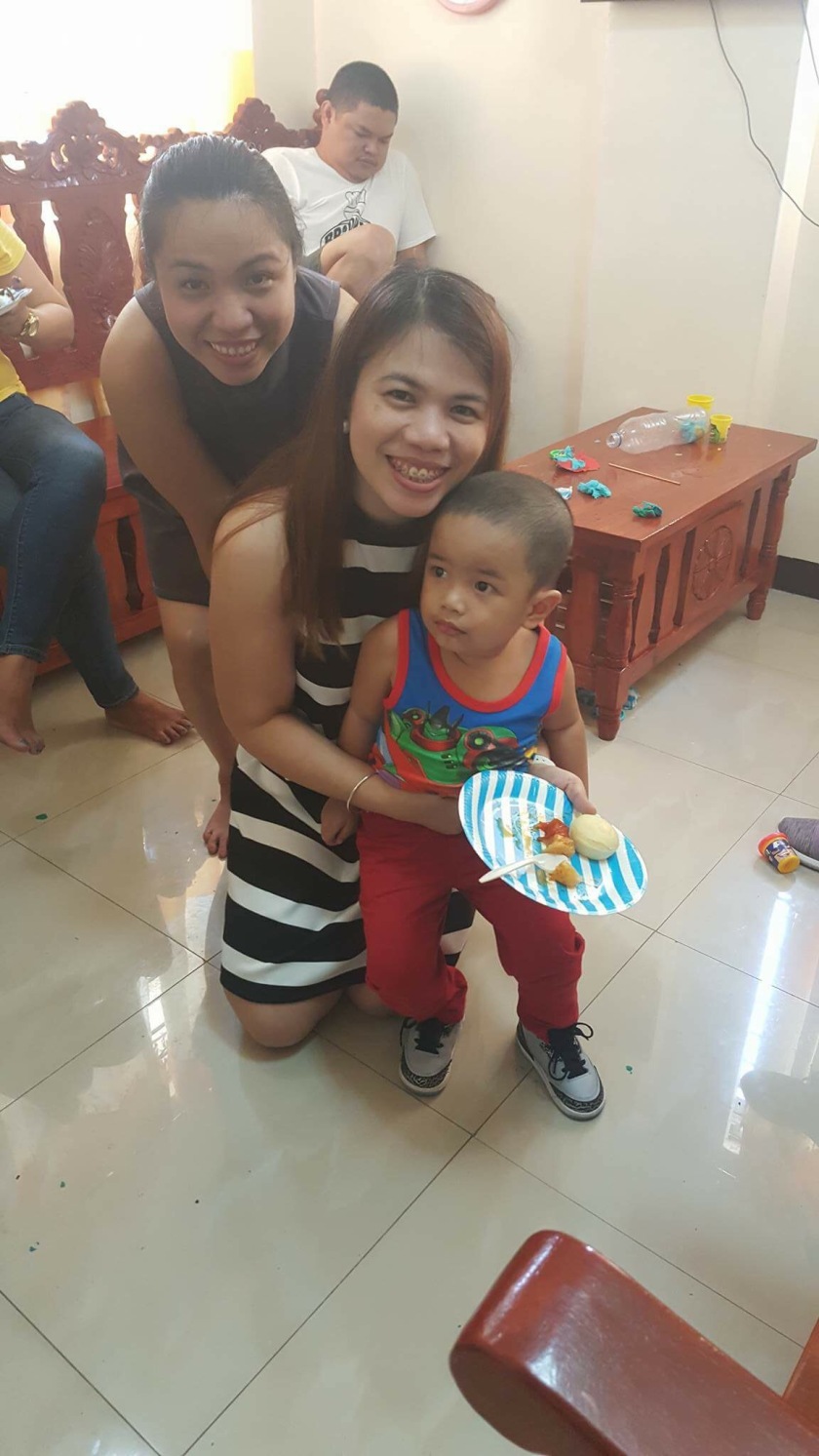 After the party we took the kids to Kidzoona at SM San Lazaro so that they could burn off their energy and play around in a fun safe area.

We paid for 3 hour’s worth of play which is enough for the kids. The ticket priced at 400 pesos per kid. 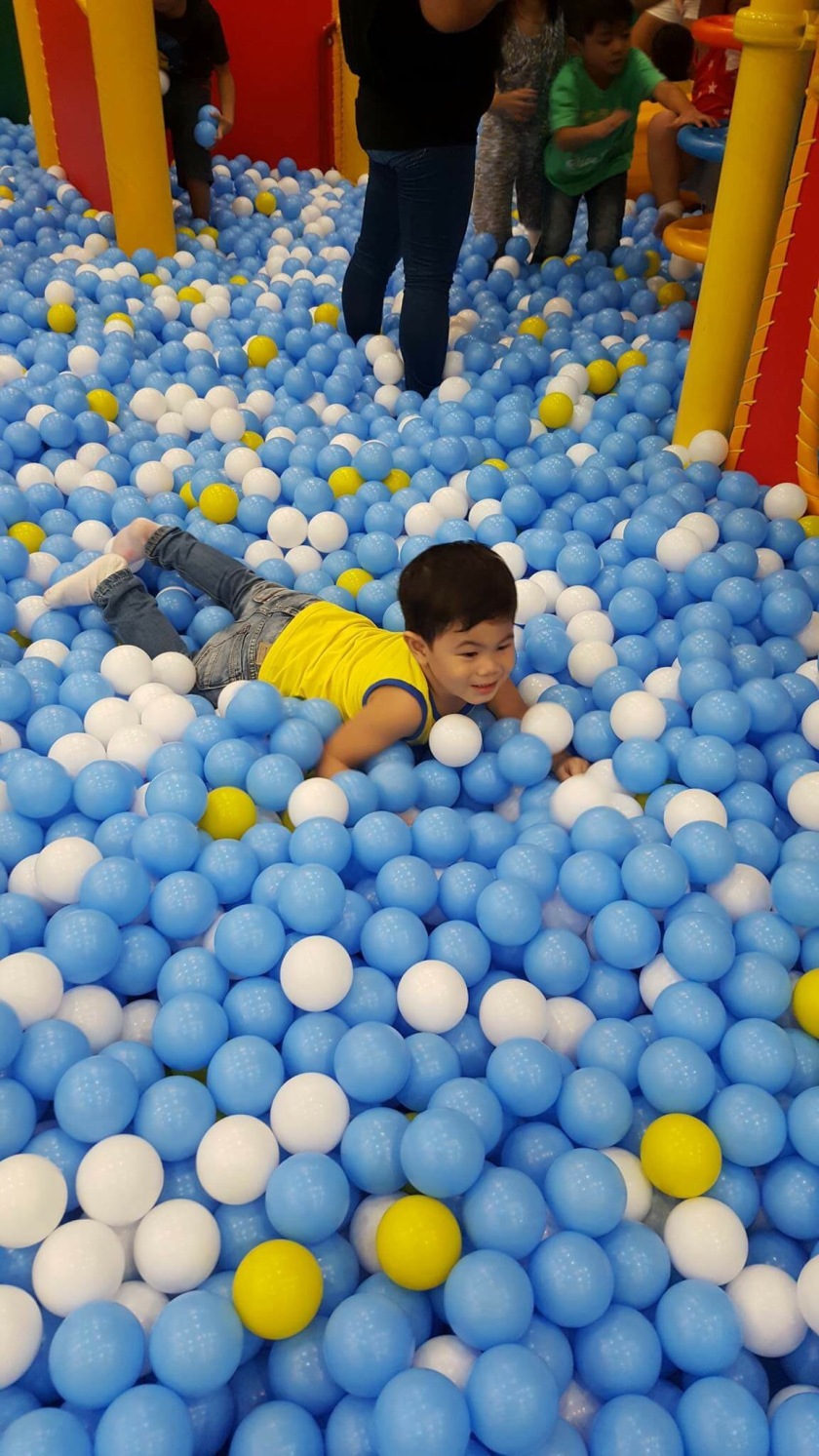 Angelo may not have a fabulous party but sure he did had tons of laughters and fun! 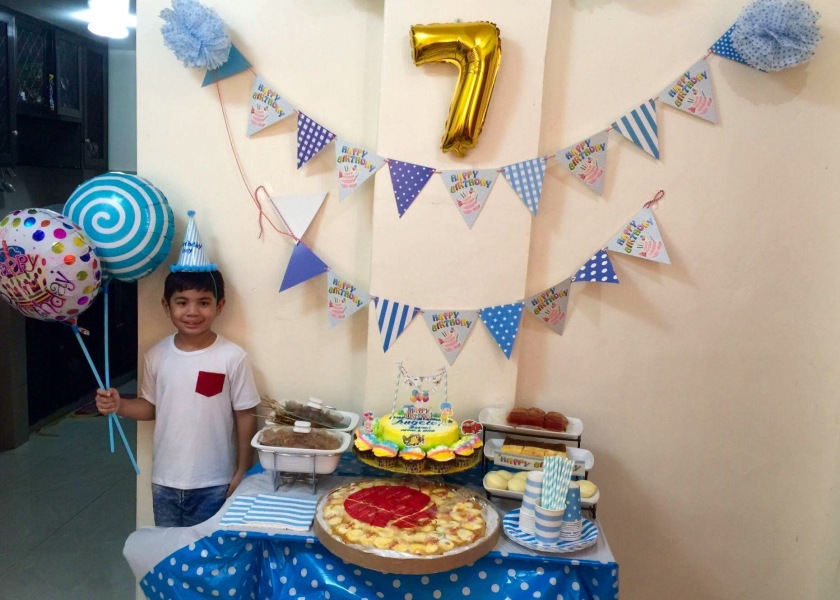 The Modern Cloth Nappying Pinays is looking for adorable babies that will be the star of their incoming campaign ads.

If you are using cloth diapers then you should start browsing pictures of your babies.

Here’s the criteria. The search is also open for overseas.

INSTRUCTIONS
+ Prepare a HI-RESOLUTION PHOTO of your baby in Cloth Diapers.
Must be 300dpi, not PIXELATED, with good lighting,
POSTER-READY and POSTER-WORTHY.

+ PHOTO MUST BE FULL BODY. NO MISSING TOES OR FINGERS and
as much as possible, please shoot with a WHITE BACKGROUND.
+ THEME-based photos are encouraged.
Example: Superhero, Princess, Cupid, Nature etc.

+UNEDITED Photo must be emailed to MCNPbaby2015@gmail.com

+ Include the ff: details:
– Name of Baby
– Birthday of Baby
– Age of Baby in Photo
– Name of Parents
– Brand and Print of cloth diaper worn in photo
– Answer the question:
“Why do I love cloth?” Or
“Why did I make the switch to cloth diapers?”

+Deadline of submission of entries is on September 30, 2014.

How do you pick the perfect presents for your love ones? If your christmas shopping lists is still on your to-do list then visit Dubai World Trade Centre from 12 December – 16 December there will be a Big Brands Carnival. It’s a free entry!

Great deals from the leading brands. Discount available up to 75% on all items.

Hi there! How’s your weekend? Mine was quite busy. Guess what keeping me busy aside from attending birthday party again..hehe

Once upon a time we had an entry that looked like this….

After almost two years of living with eye-sore and awful entry wall..

I am excited to transform the space and make it more chic.

It was such a tricky spot to problem solve since our main switch board looks really disgusting.

To hide the main switch board. I printed subway art and framed it. I bought all the frames from IKEA but most of them was from “AS IS” section including the big frame.

(tip: before roaming around – it’s a MUST to looked at this corner- sometimes you can find gem on that area) 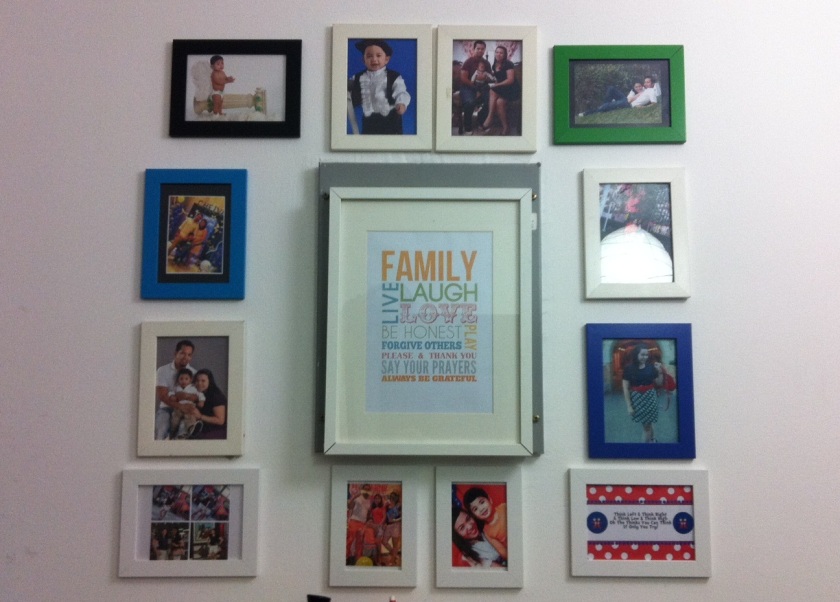 SOOooo pretty!! Now the nook is a space with meaning and simply ADORABLE! It’s simple.  Nothing here is overdone.

This was one of the best organizing decisions I’ve ever made.  The small  touches make our house a home..

Now,I am pretty sure that every time we are putting on our shoes or leaving/getting our keys – it will always brings a smile to our face  daily..

Because this little space in our house creates a haven of tranquility.

For me, it is about loving the ones I already do have and simply organizing it.. 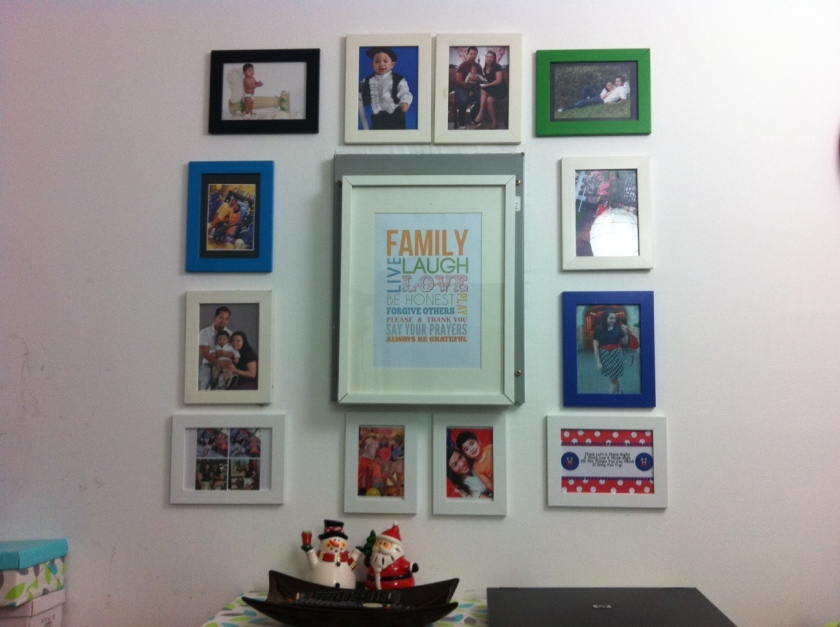 One of my most favorite things about being a mother and a wife is coming up with unique gifts for special occasions.Since Fathers Day means a lot to me. I always wanted to make sure that each year will never be the same but will always create memories.

And what better way to show your love, then with a thoughtful present…

I love compiling and putting into words the things we love about our Super Dad. This year to pay tribute to the man of my life and the best dad in the whole world I created scrapbook using old desk calendar. Yes! _ aside from socks,neckties and cards you can create your own photo book using materials you already have in your house. Recycle materials +  little creativity + effort + so much love = Happy Father 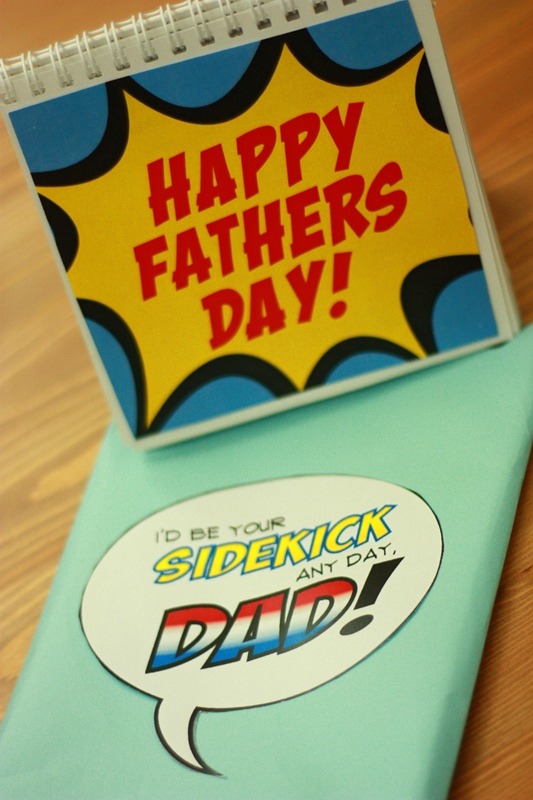 When I thought of this idea I wasn’t sure whether Daddy A will really like it because he’s not the “mushy and “sentimental type of man.But I want him to know how much I appreciate his hard works for being the best Daddy to little A. I want a present that he can treasure for years and years to come. 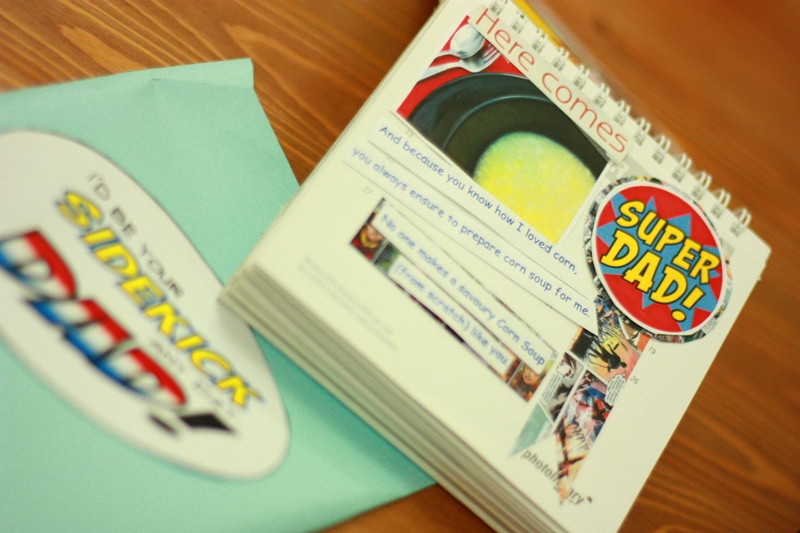 Little A was so excited that he wake up his daddy.

Super Dad almost burst to tears while browsing our DIY photo book.He said he can’t bear the thought of little A leaving us..Awww!!!

It’s true what they say…”it’s the LITTLE things that matter most!”

Who doesn’t love a box of sweet treats every once in a while…especially if it’s customized only for our real life Superhero! 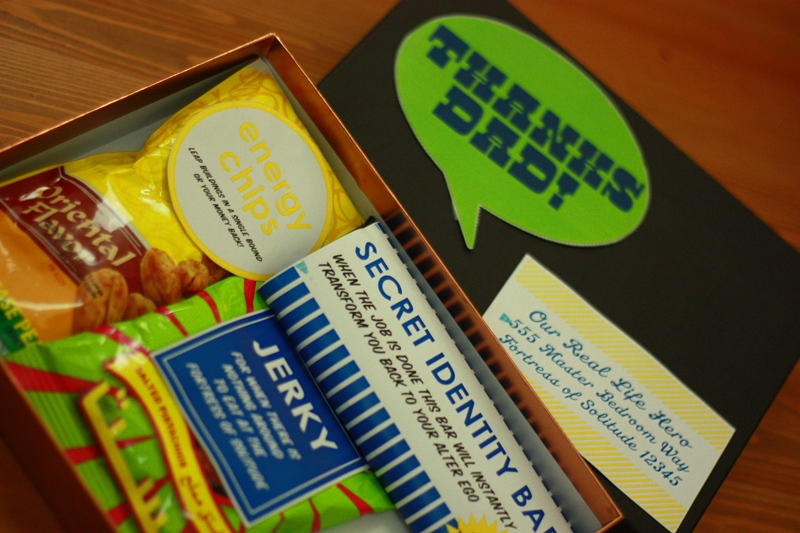 I still have time on my hands so aside from cutie little book I decided to put together this incredibly meaningful fun box. 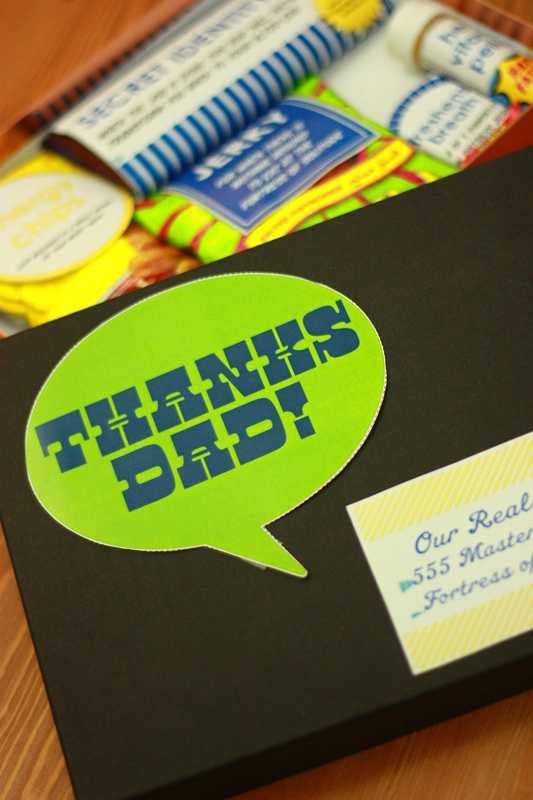 Spoiling him with his favorite treats. Inexpensive yet elegant and romantic, right? 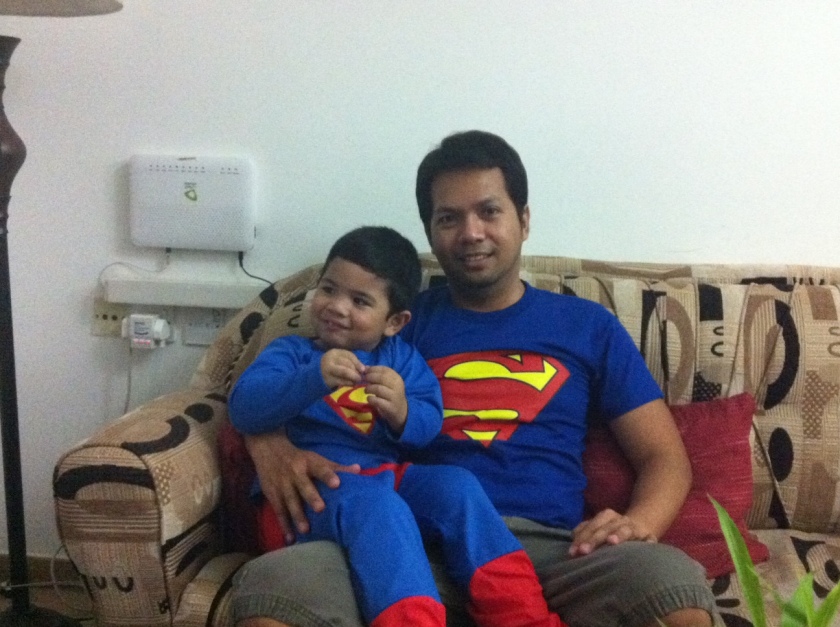 How about getting him Superman shirt to match with our little boy. My Superman and his sidekick -Superboy!! 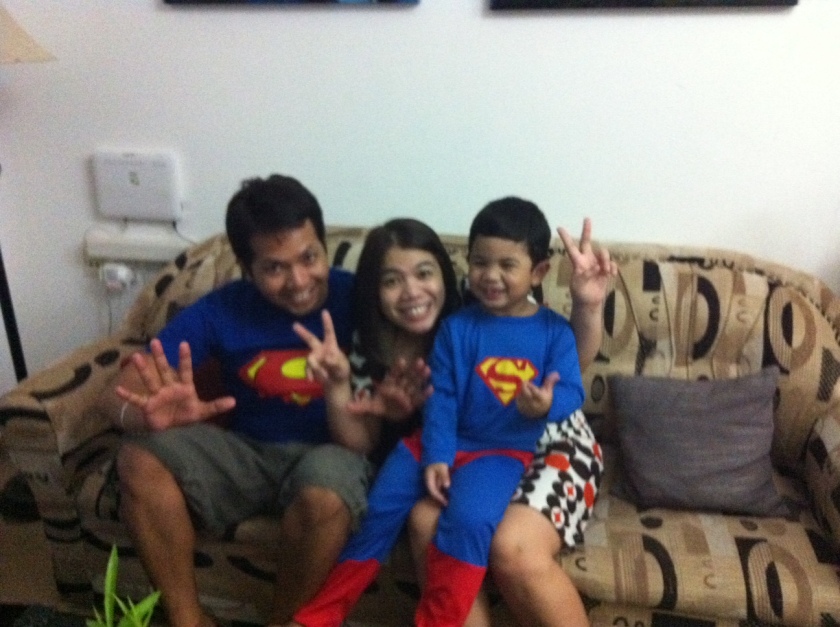 Let’s SPOIL those awesome Dads of ours, shall we? Hooray! To all the fathers in the world!

Happy Fathers Day Super Dad!! I hope you like our present!!

I always feel elated everytime we are receiving books as a gift. More than toys and clothes books can be more exciting for us. As I said little A loves reading and browsing books. Though books here in Dubai  are quite expensive we are buying atleast one book every payday to add to our library.

Then I read from n@w group that Booksale is really affordable. They are selling pre-owned but still intact,useful and a way much cheaper than the other bookstore. After learning about this great tip I asked my sister to pay visit to their nearest branch.

She became a fan and never leaves without book on her hand.

True to their  mission Booksale is a treasure trove of the book gems you’ve been searching for. Since I also mentioned to her that the little boy likes Dr. Suess books, she got all of these.Now reading can be more affordable.#It’s more FUN in the Philippines

I still have wishlist and if we will go home maybe early next year then I will surely hit their shop and hoard more books.

To all preggy mommies this post is for you. I got this press kit from my inbox and thought of sharing . I also read that they are giving good stuffs. Kaya mga mommies GO na!!

For the best start in life, Philips AVENT will host a breastfeeding and early child nutrition forum for mums-to-be and healthcare professionals. The forums are free of charge with one in Abu Dhabi at the Beach Rotana Hotel on 28th May and one in Dubai at the Habtoor Grand Hotel on 30th May.

You can visit www.motherbaby.ae for more information.

As the days get longer and the weather warms up, I can’t help but think about cold treats.

And the best way to quench the sweltering summer days is a very sinful treat, but worth all the indulgence.. 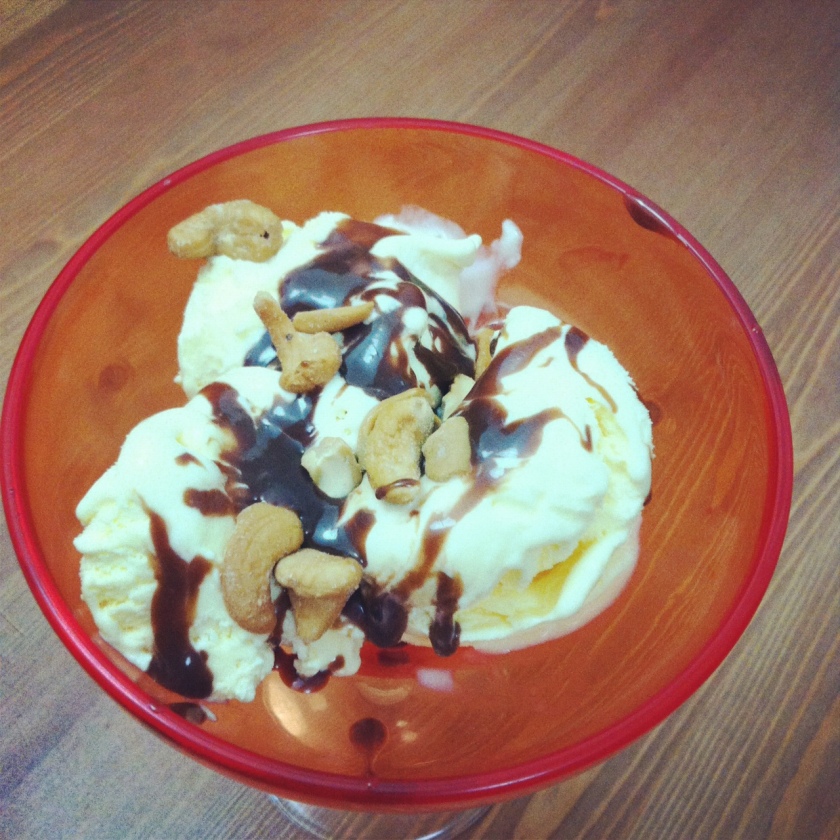 I know Mothers Day is over but yesterday I was treated/pampered like a queen by my two boys. As soon as I opened the door my boys are waiting for me ready to give their big hug and bunch of kisses.

The little boy was pulling my hand going to the family room. He can’t hide his excitement to show that Daddy Al cleaned and changed our curtain,bedsheet and everything was in proper place. It doesn’t end there when I went to the bathroom to put my clothes on the hamper I was stunned. Seems hubby is on the mood for general cleaning.The shower curtain and the rugs were changed as well. He even used the shower curtain I scored from Red Tag sale. It’s safari design and it’s really cute. I got it for aed 19 only.

By the way he also cooked Beef Nilaga and Dried Pusit for dinner.

After eating dinner I offer to wash the dishes as he needs to go for his class. He’ attending Training for Victory.

While washing I’m thinking of a dessert/reward for him.He can just rest and wait for our scheduled date of cleaning but instead he wants to surprise me. Something that I always liked about him. I checked our cupboard to see what I have only to find that I only have flour,cinnamon,brown sugar and few Oreo cookies in the jar. 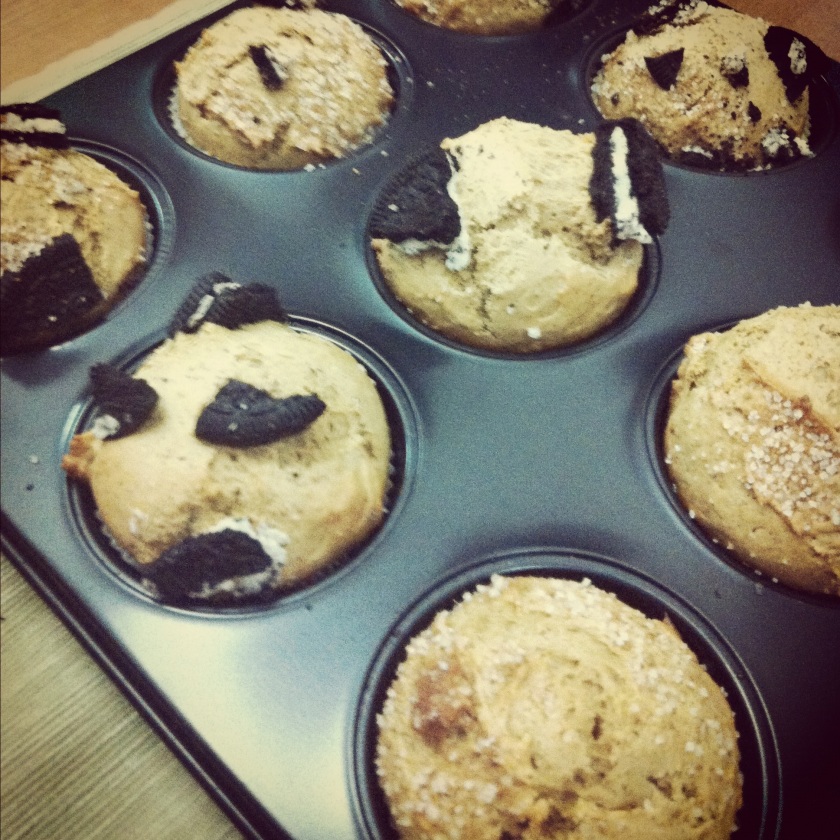 Oreo Cinnamon Muffin would be best dessert  since I knew that after his class he would be hungry again.

Spreading Nutella wouldn’t hurt that much so I added some to others.

In a separate bowl, whisk together eggs, yogurt, sugar, oil, and vanilla.

Add flour mixture and mix with light strokes until the dry ingredients are just moistened.

Do not overmix; batter will not be smooth.

Divide batter among the muffin cups and add oreos.

Bake until a toothpick inserted in one or two of the muffins come out clean, 12-15 minutes.

* Note – Hubby and Little A said it’s delicious maybe because they love me lang!hehe.. But for me the muffin was dry and bland. I will double the yoghurt next time or I’ll add buttermilk. We’ll see next time!

Yesterday I asked little A to switch off the light in our dining area coz we will do the reading in our sala. And also it is a common practice in our home to always turn off the lights when not using.

Mommy: Little A can you switch off the light so we can start to read the book.

Little A: Where is it mommy?

Mommy: The switch is beside the red frame near the kitchen door

Little A: red frame?(walked towards the frame)

Little A: Mommy, I can’t reach it’s too high

I was near to him and I am just observing for his next step. The next thing I knew he pulled the chair and climbed up – then switched off the light.

Little A: Your welcome (while returning back the chair)

Mommy is swinging over the moon while watching.The little boy knows how to solved a simple problem.

*Note – We are not recommending to teach the child of playing the switches. I am just trying my luck if he can think logically to solve simple problem.